A thief received some instant karma after he allegedly broke his ankle during an attempted robbery and was filmed screaming in agony.

In the footage the thief is shown leaning on a railing in severe pain, screaming ‘my ankle, my ankle!’ in between sobs. The moronic mugger broke his ankle while jumping down off a fence to threaten his victim with a knife.

The guy filming the video then demands the thief to throw over the knife he had in his possession. The thief can be heard saying: ‘On my mother’s grave I threw it’.

Meanwhile the man explains to another person, that the injured man tried to ‘rob’ him for his phone.

The man then asks if he should call the police, as the thief begs for mercy repeating that his ankle is broken. 21-year-old Hooksett woman went directly to jail after she allegedly killed her boyfriend with a single slap during a game of "Monopoly" that was...

Huge Creature Swimming In The Thames Something creepy’s been filmed in the River Thames... https://youtu.be/ubwFvl-My4E The disturbing footage appears to show a huge, mysterious creature ‘swimming’ through the river, quickly bobbing up out... Man Who Jumped In A Lion Enclosure Thought He Was God’s... On Saturday, a man named 'Franco Ferrada' stripped and then jumped into a lion pit and taunted the animals into attacking him at Santiago's... 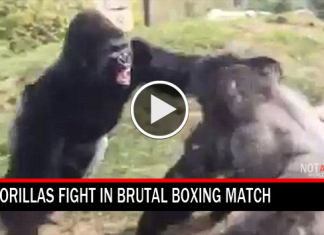 Crazy video of two male gorillas at an American zoo has gone viral after the pair exchanged blows in a fight. The clip was caught...
Load more
Loading...
© TheNoChill | Most notorious website.