TheNoChill
Share on Facebook
Tweet on Twitter
A drunk man began antagonizing the elephant by lying down in front of it, before climbing down the bank until he was standing directly in front of the animal.

The elephant appears to lose its temper and rushes toward him, causing him to fall over.

Concerned onlookers scream out in the background, telling him to get away from the elephant.

According to translations at LiveLeak, the people say, “Hey idiot, are you crazy? What the f*** are you doing?”

Another person screams that a man had been killed by the elephant a few days before.

After the injured man is pulled up the bank, another onlooker says: “We told these motherf*****s to take him to the van, f**king a**holes take him to a hospital now.”

Ruins of Ancient City Unearthed after Major Earthquake in Australia Ruins of an ancient city have been unearthed in Australia’s Northern Territory after a major magnitude 6.2 earthquake hit the region last week. Archaeologists from the... A white police officer lost job after after posting a racial slur to her Snapchat account. Melissa Adamson posted a photo of her wearing her...

Guy Catch His Girlfriend In Bed With Another Man

Finding out your girlfriend has cheated on you can never be a good feeling, but catching her in bed with another man is a... A drunk man began antagonizing the elephant by lying down in front of it, before climbing down the bank until he was standing directly... The latest fruit in majority of the states of the U.S is the Pong Pong fruit. Its size can vary from a small ping...

14 Year-old Girl Run Over By Car During Schoolyard Brawl 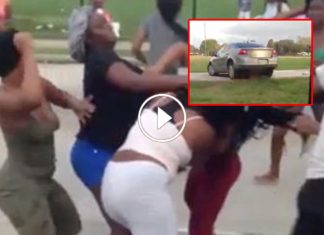 Houston, Texas - A shocking video shows the moment a schoolyard brawl escalated completely out of control and a teenage girl was run over...
Load more
Loading...
© TheNoChill | Most notorious website.