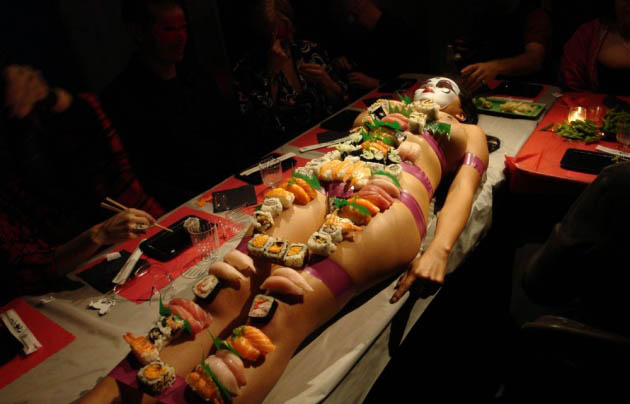 The Japanese practice of “Nyotaimori ” (or “body sushi”) has grown from obscurity to mainstream in recent years. In traditional Nyotaimori , the model is generally expected to lie still at all times and not talk with guests. The sushi is placed on sanitized leaves on the model’s body to prevent skin-to-fish contact and on sufficiently flat areas of the body because ofwhich the sushi will not roll. Nyotaimori is considered an art form.

Usually champagne and sake are served in n*ked sushi restaurants. Guests must be respectful and observe the strictest decorum because their models are totally nu*e. Talking with the models is highly discouraged. Inappropriate gestures or comments are not tolerated. And diners can only pick up sushi with chopsticks. 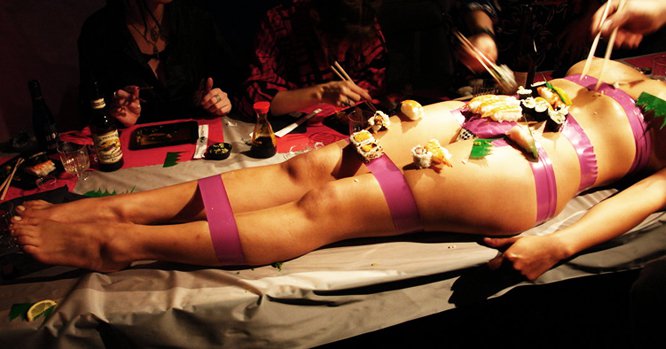 In the United States, people have tried to make it an elevated experience,” says Mark Scharaga, the owner and chef of a Nyotaimori catering company. “But We’re trying to take it away from its sordid past into something far more elegant and distinctive.” Though Scharaga’s friends would often introduce him as “The N*ked Sushi King” in the early days of his business, he says he changed the name to the Nyotaimori Experience because he wanted to move away from a “low-brow crowd.”

He adds, “I’m focusing on people who care about cuisine and the quality of the sushi.”

It may seem like the n*ked woman lying underneath them would overshadow the rolls. But Scharaga sees the model as part of the aesthetic, not the main course itself.

“We’re not selling s*x—we’re selling an experience with a beautiful woman or man,” he claims.